Modifying a digital photo frame for ease of access 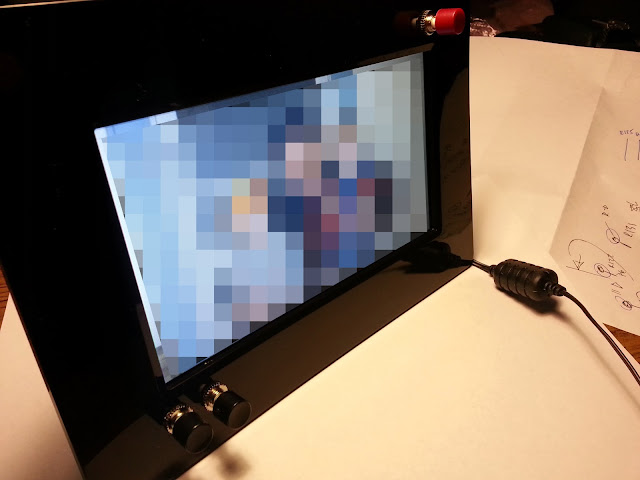 Over the last holiday season I spent some time looking for a digital photo frame to give to someone I'm very close to that's suffering from a neurodegenerative disease. While such a device might not be the easiest to operate by someone in such a condition, I assumed I'd be able to find a product simplified controls and large buttons, geared toward seniors or the like. It didn't take long before I realized that I would need to build or modify a device myself in order to come up with something to suit my needs.

Months have passed since then, and while I've considered patenting the design, I feel as though it can do more good being released under a Creative Commons license. My build, after loaded with pictures was not only completely operational as intended, but brought "overwhelming" tears of joy to a person's eyes. It was more than I could have hoped for - and if you are able to use or expand on this idea to bring joy into someone else's life, all the better.

Anyway, on to the build.

The goals were straight forward. A digital picture frame with large obvious buttons for controlling at least play/pause, forward, and back. Essentially, the device needed to center around an ease-of-access design. 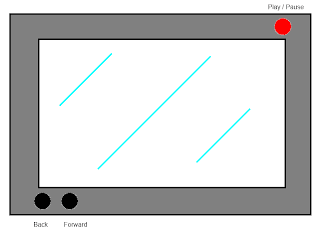 A quick mock-up of the design.

The process started by selecting a digital picture frame to modify - I just so happened to have a Best Buy gift card with a few bucks left on it, so settled for an inexpensive 7" Dynex frame, though any frame with a significant bezel surrounding the screen itself would work fine.

Most digital photo frames have their controls located on the back or sides. Beneath the buttons, there will be some sort of circuit board - it should be obvious once the frame is disassembled. On the Dynex frame, there was a separate board connected to the main board via ribbon cable. 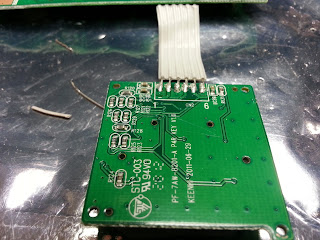 The back of the board that connects to the plastic buttons.

Because no schematic of the device was available to me, I had to figure out what trace led to what button - unfortunately this wasn't as simple as referencing the button-facing side of the board to the other side. However, by probing/shorting first the six wires connecting to the board, then the different wires to the sides of the surface-mount resistors located on the board I was able to locate what needed to be shorted for the appropriate buttons - just take notes through the process. This was obviously done with the unit turned on, and connecting one conductive point to another (I used probes from my multimeter) and then observing the effect, if any on the display. It should go without saying that, even though the power supply knocks down the voltage and current considerably, it's always advisable to exercise caution when dealing with anything, even indirectly, hooked up to mains. 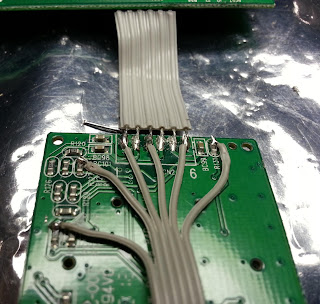 A less than pretty solder job got the job done.

Using some ribbon cable stripped pulled from an old IDE cable, I made sure I had enough length to get the wires to where I intended to put them on the bezel of the frame. It's also worth noting that I put a switch in series with the the DC-in on the main board. The switch can be seen with the momentary push buttons below. I also used an appropriate adhesive to assure the solider joints would not be strained. Hot glue is dandy, but it would be a mistake to rely on tape alone for such. 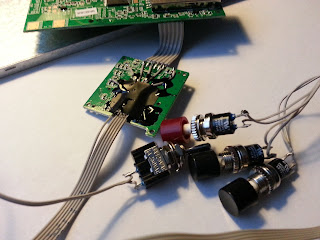 Wired and secured, everything was testing okay.

The last thing I did, which probably should have been among the first was use a dremel to create openings for the buttons and switch:

I'm  not sure that it would have been much better if I had laid out and cut holes first, but it was necessary for me to modify the base of the buttons in order to fit them into inner the bezel around the display. You can actually see such in the image above - I had to flatten out one side of the button to accommodate the metal housing of the LCD. Learn from my mistakes, I suppose. 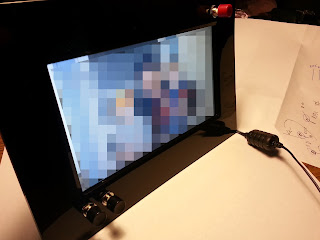 The final step was to cut the appropriate openings for the outer bezel/facade and clean it all up.

One additional step I could have taken was to do a similar modification to the remote. Many digital photo frames come with IR remotes, and the exact same process could used to put large, tactile buttons inside a small project box. Should I make a similar build, I may go this route instead - even the small coin-cell battery could be swapped out for an AA or similar, meaning a battery wouldn't have to be replaced for a very long time. Or even build a remote that is tethered to the frame - the options are endless, I suppose. 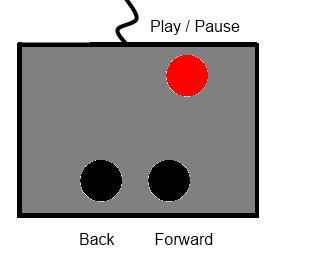 Anyway, it's obvious (at least in retrospect) that there's a number of changes that I'd make, but the concept is sound - and allowing someone whose memory (and mind) is fading away to revisit past decades thanks to scanned pictures and a digital frame made the effort more than worth while. If anyone has any questions, or would like assistance with such a setup, don't hesitate to get in touch.

Modifying a digital photo frame for ease of access by Nik is licensed under a Creative Commons Attribution-NonCommercial-ShareAlike 3.0 Unported License.
Posted by Nik at 3:25 PM