I've only had a handful of sessions so far - and while I've not been able to come up with a truly objective method of tracking results, early findings are encouraging. Cambridge Brain Sciences has some great resources for testing/tracking. Admittedly, I can't establish causation, but it's hard not to be a bit excited and a lot intrigued. 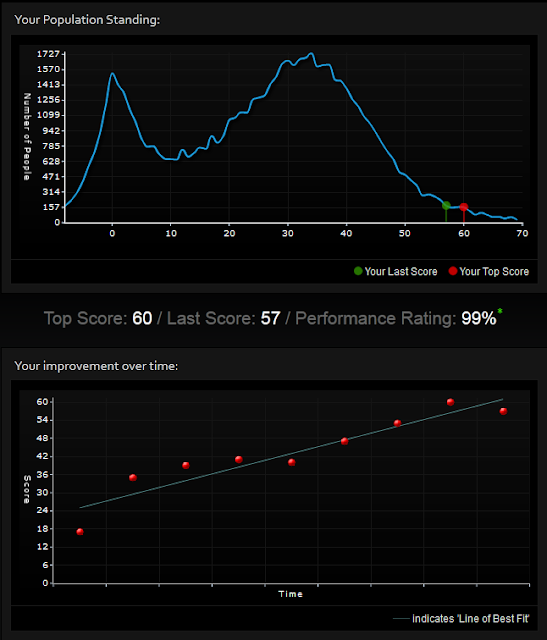 The first score I can attribute to simply not being comfortable with the mechanics of the test. Whether the following increase in score is due to a practice effect, or the tDCS, I can't say. The test itself is called "Double Trouble," and is one of the few tests I've taken on the site, with the last data point being immediately after stimulation, whereas the others were either hours or days after such.

I need to do more work on establishing a baseline. At this point, it's been over a week since I've had a tDCS session, and may give it a few more days in hopes of having any residual effect wear off. At that point, I intend to spend some more time taking the tests offered, and call that my "baseline," then resume tDCS sessions.

For what it's worth, I've done perhaps 4 sessions total, starting at 1.0ma up to 1.9ma for 20 minutes - all with the standard M1/motor cortex stimulation.
Posted by Nik at 9:01 PM