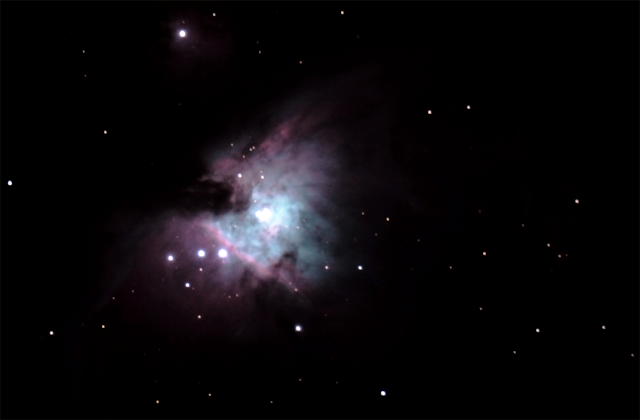 Shot M42 again - longer exposures this time, with some more patience in post. Looking at the same object last week, I feel like I've made progress.

There's still a lot to learn (and a lot to apply that I've already learned) - but so far, so good.

Email ThisBlogThis!Share to TwitterShare to FacebookShare to Pinterest
Labels: astrophotography

Over the past several years, community college after community college (and even some universities) in the region have abandon more rigorous debate formats and adopted IPDA. While IPDA is arguably more accessible than NPDA (or carded/evidence debate), the format has some severe limitations, at least in the dozens of tournaments I've observed. While some of these drawbacks are inherent to the format, many are not, and there are several things that tournament directors, coaches, and competitors can be doing to make for better debate (at least in terms of fostering education, critical thinking, and better argumentation in general). In this post, I'll focus on what the folks running IPDA a at tournament out to consider in the type of topics their writing.

The baby was thrown out with the bath water.

IPDA has become increasingly popular here not so much for its own defining qualities, but for what it's not - namely, NPDA. As NPDA has evolved to become more complex, faster, and overall just require more work to be competitive, the majority of community colleges in the region have (sadly) abandon it in favor of IPDA (it's worth mentioning that many of the four-year schools in the region are among the very best in the country for NPDA, but that's a different story).

Many of the justifications for such has been less than straight forward and sincerer, but that can be covered at a later date. The bottom line is this: in the DoFs' adoption of IPDA (and even BP, for that matter), the move away from an NPDA format largely meant throwing away what is objectively good for debate with what is subjectively bad. The result of which has been an activity that is, at best not living up to its potential, and at worst doing a disservice to the competitors. That said, IPDA is likely to continue to grow for the foreseeable future - at least until history repeats itself. But that doesn't mean educators can't take additional responsibility and make the event better until that point.

Starting at the top.

Generally, the defining factor for any IPDA round is the topic selection. The best rounds occur when both competitors are starting from the same page - that is, have a clear understanding of exactly what they're going to be debating going into prep. It's from this premise that policy-oriented topics are far preferable to value or metaphor. In my experience, value and metaphor-based topics are kept as an option for competitors to strike to because persons writing the topics do not understand the inherent disadvantages of such (or in the case of the last tournament I wrote topics for, told by the tournament director to include include non-policy topics), or as an homage to the days trichotomy-based debate. Policy topics avoid such drawbacks avoid these drawbacks.

If further explanation is required, we can start by looking at a couple of the specific issues with non-policy topics. The biggest problems arise from metaphor debates, here the affirmative has the obvious advantage of being able to shape the round around their interpretation of the metaphor, because procedural debate is so strongly frowned upon in IPDA, tournaments have started to adopt rules of disclosure - that is, the affirmative is tell the negative how they'r interpreting the metaphor during prep-time. In practice, this removes the metaphorical element from the round, undermining the whole idea of the metaphor in the first place. Secondarily, metaphor debates allow for the competitors to engage in debate that is just down right silly - I have seen a number of rounds (usually novice/junior, though not exclusively) interpret the metaphor literally, debating whether or not the "grass is always greener..." or, "money makes the world go 'round." at this point, there's zero hope for any education in the round, and becomes a rhetorical exercise at best, if not a train wreck.
It's true that should metaphors be abandon, there is the potential loss for creative debate that would be less likely to appear in other formats, but if this was the case, the benefits of removing metaphors as an option on the strike list far outweigh any negative repercussions.

Onto the problems with value debates. Admittedly, I'd judge a value round over a metaphor round any day of the week, but value-based rounds too, have problems when compared to policy. The primary issue with value rounds is that the typical framework artificially limits the round. By establishing a value/criterion the round must be weighed through such. Because values are going to be something like, "education," or, "security," or, "the economy," unless their's debate on the value*, the round is restricted to such, thereby making positions based in alternative values useless. This is a bad thing - as it's completely divorced from how decisions would be made in the real world - that is to say, if something like security was the value, any impact to the economy, civil liberties, human rights, are neglected. When decisions are made "in the real world," outcomes and impacts on all levels ought to be evaluated.

The one solution to such is always have a criterion of "net benefits," such that all other values/criterion open for debate, but at that point, you're basically dealing with a policy round in its basic form - we'll examine this below.

*debating what value ought to be preferred in a round can (and at times, does) make for good debate, but the time constraints of IPDA rarely allow that debate to develop, and is thereby impractical. That said, I fully admit that confining a round to a single value could encourage depth of argumentation, but the fact of the matter is that this rarely occurs, and wouldn't be limited to value rounds, anyway.

There's not too much explaining that needs to be done here, but I'll cover it rather than leave it out. Fact debates generally become a evidence/warrants debate. This can have the benefit of exposure to information during prep time, but the debate itself generally becomes a list of "for" and "against" the topic with little interaction or actual argumentation between them.

Before explaining why policy topics are superior even for IPDA, I'd like to be explicit on an issue that both metaphor and value debates can suffer from, but only glossed over above. Both of these genres don't take advantage of the potential education that can be generated and provided from debate - that is often these debates become less about ideas or things that are going on in the world, and more about the rhetorical interactions of the debaters - while there's obvious value in honing such skills, they're not mutually exclusive from engaging ideas and events that matter. Once in a while an interesting philosophical debate may occur, but those are few and far between.

So what is a policy topic and why is it so much better than the alternatives?  A policy is more or less what it sounds like; a definition of such may be something like, "X should Y," where "X" is an agent and "Y" is a mandate. For example, "The United States should make significant investments in its transportation infrastructure," or, "Greece should leave the Eurozone," etc.

These kinds of topics have several benefits. First, they limit confusion, that is, both debaters will know what they're debating, and what they ought to be doing as affirmative and negative respectively - it's far more straightforward metaphor (obviously), and even more forward than value, in that the negative can spend less time worrying about whether or not their arguments will interact with the affirmative's proposed value).

Second, topics can be tailored to "encourage" debaters to engage with certain issues/events. That is, rather that trying to come up with reasons why the "grass is (or is not) always greener on the other side of the fence," competences can research/learn/generate argumentation about the things like Israeli occupation of Palestine, human rights abuses in any number of places, US or other's policy on X, etc. Exploring these kinds of issues not only provide much more education to competitors, but I'd argue that in the process, make them more aware of what's going on in the world and thereby (hopefully) will lead them to becoming better global citizens.

Finally, with or without a "plan" policy topics function best using net benefits the criterion. Using net benefits, in my opinion, always preferable - for more than one reason too. First, the criterion is inclusive because encompasses its alternatives, including values (e.g., one could have arguments on economy security, and human rights functioning in the same round where a single value wouldn't allow for such). Next, net benefits encourages broader thinking and is more "real world," as policy decisions are made (ideally) by considering multiple factors - in fact, in real policy makers typically use a cost-benefits analysis framework for decision making - a close approximation for net benefits with a valuation component.

Policy topics encourage good debate, and offer the best access to increasing competitors' education and knowledge about the world. I really don't feel as though "they could strike the metaphors/value/facts" is an appropriate approach because of the reasons illustrated above.
Posted by Nik at 8:41 PM No comments: 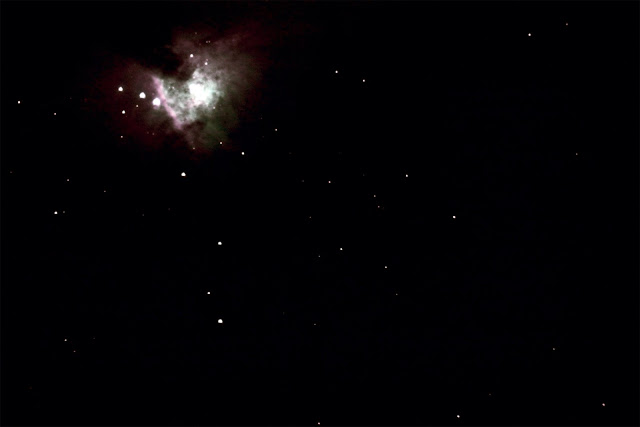 This is, by far, the best image I've been able to produce. Granted, I'm still new at the whole astrophotography thing, but I'm proud of this one. M42 - The Orion Nebula.

I need to learn more about image processing... I know there's significantly more data in the image than what shows up here.

Email ThisBlogThis!Share to TwitterShare to FacebookShare to Pinterest
Labels: astrophotography

I'm excited to explore the possibilities that OpenStim may bring about. Perhaps I'll share my thoughts once I spend some time with it.
For now, the hardware is put together and passing diagnostics. Wish me luck. 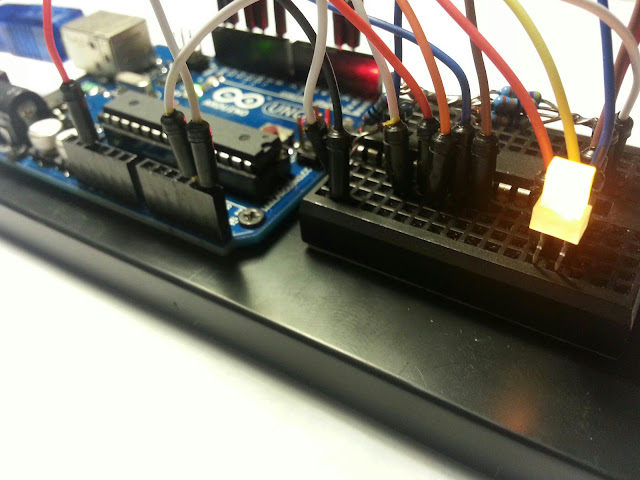